Outside of Miniature Life

Did I tell you we moved?

Yes, we bought a house and moved to the beautiful and very picturesque area where there are a lot of lakes to fish, the river, a lot of hills to hike. My Sweetheart and I love hiking. Usually it took us about an hour to drive to the places of hiking from the previous place we used to live, now it takes us the most 8-10 minutes.

This year we started hiking pretty early - at the beginning of February.

Knowing that we have a lot of hiking paths to explore we started with the closest. The first thing we paid attention at the information board was a list of wild life in the area. We were warned, that the area we were going to hit is full of rattle snakes. It was first time we saw the sign about rattle snakes. The path is not long, only 2,5 miles along the river. 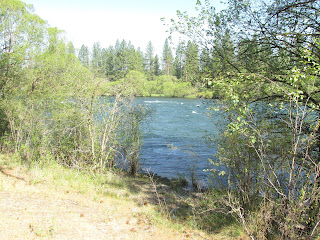 I was leading and looking around and deep inside the bushes on the sides of the path instead of looking in front of me. I must tell you it was the most ALIVE and full of wild life path. We saw ducks, little cute bright green frogs with red eyes that can fit on your thumb (frogs, not the eyes, :))), a dear crossing the path a couple of yards in front of us. Just amazing! And, can you believe, I didn't have a camera with me! Oh, I was sooo upset.

So close to the end of the hiking route I saw something moving on the road. OMG! Big, long and fat tail of a snake! His head was hiding in the bushes! My husband is fascinated with the snakes, he reads about them, he watches shows about them, he studies them. Here he finally saw a real alive bullsnake! 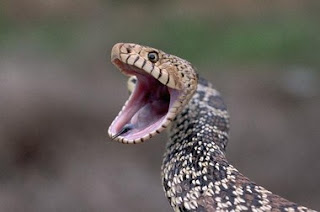 I automatically jumped back, my hubby instead of turning around and follow me, came closer to investigate it. The snake hid in the bushes and as soon as Jim heard rattling sound he made a smart decision to turn around, but he saw his head and eyes staring at him.

The fact about the bullsnakes is that they average about 6-8 feet (1.8 m) in total length. Adult specimens have been weighed from 1–3.6 kg (2.2–7.9 lb), though the heaviest known specimens can attain 4.5 kg (9.9 lb. This makes the bullsnake among the largest snakes native to the United States. Bullsnakes are sometimes mistaken for rattlesnakes, because they perform an impressive rattlesnake impression when threatened.

Even though a Bullsnake is considered to be not a poisoned snake, I insisted on turning around.

With only one thought to leave that place as soon as possible and came home saved and not to have a rattle snake on our way, we directed our steps back to the parking lot. We arrived there safely but unsatisfied: it was the first hiking route we haven't completed! It means one day we MUST come back!

What would you do? Would you come back next time and finish it or just forget about it?

Email ThisBlogThis!Share to TwitterShare to FacebookShare to Pinterest
Labels: Outside of Miniature Life

Ieks..Natalia....I would move again. Snakes nearby my house is something I couldn't live with.
Walking by the river I would love but when there are snakes living I would pass!!

What an outdoor adventure! But I think one day you have to go back, with heavy shoes on and having the camera with you (this could have been me... *teehee*) Here in Germany we're lucky enough not to have lifethreatening snakes, there are only two sorts - and to be exact one of them only looks like a snake but is indeed a lizard *grin*. I think I prefer hiking without any face-to-face-events with rattle snakes... ;O)

Good for you that you are moved to a place where you will thrive and where you can explore your paasion to hike, together.
I would never come back to a place where I'd meet a snake, never. Suddenly I'm so happy to live in a big city.
Hugs
Wyrna

Dorien, I hope we will never see the snakes in our living area, close to the house. We will move out for sure, no doubts!

Birgit! This is exactly what we decided to do: to come back and finish the trail, but somewhere in the Fall when it is cold enough for the snakes not to get on our way again, lol...

He-he-he, Wyrna, there are advantages and disadvantages of living in a big city. I love to live close to the big city enough to be able to go to my favorite store shopping, :)))