I've been asked where the name of my business "Scarlet Sails Miniatures" came from. Thank you for your question, I am more than happy to answer it. 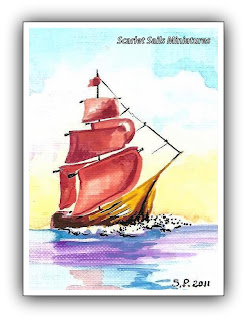 It was painted by a Russian artist Svetlana Pottratz that lives in Oregon, here is the link to her website: http://www.mysvet.com/

The name Scarlet Sails was adopted from the name of a novel written by Alexander Green "Scarlet Sails".

"Scarlet Sails" is one of the most famous work by a Russian writer Alexander Green. 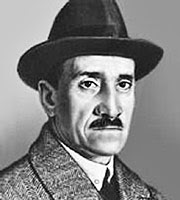 "Green" is his pen name and sounds un-Russian just like the names of his heroes: Thomas, Asole, Grey, as well as the names of the places where the heroes live: Caperna, Lisse, Zurbagan. The appeal of Green's writing is universal. It lies very much in exotic, romantic, faraway atmosphere that he creates. Because of this he has been compared to Edgar Allen Poe, Robert Lous Stevenson... Yet Alexander Green was a Russian as Russian samovars. He was born as Alexander Grienyevsky, in 1880 in Vyatka, and lived the entire life in Russia. 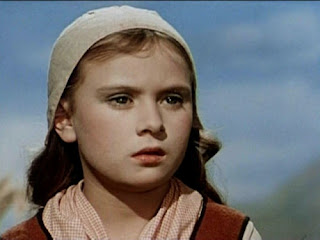 has been told by the chief of all the sorcerers that once, when she would be a grown up, far out to sea, the sun will shine upon a white ship with scarlet sails and that a handsome prince will be on that miracle ship, and that prince would take her forever to his kingdom, where they will live together in a deep valley of roses, in friendship and joy that she never knows tears and sadness.

Since that time Asole has been waiting for the prince and his ship with scarlet sails. 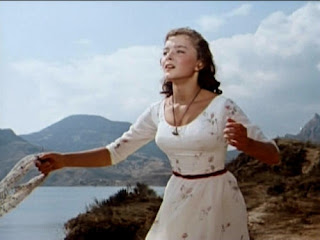 Her dream came true. One day the miracle ship with scarlet sails arrived. 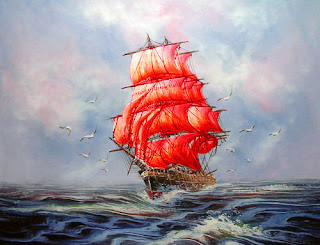 The prince, Grey, reached out his arms to Asole. 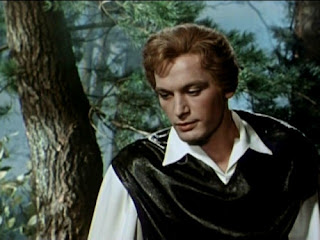 "Asole closed her eyes, fearing that if she kept them open everything would disappear. Grey took her arms, and knowing now where she could find safety, she hid her face, wet with tears, on his chest. Carefully, but with a smile, shaken himself by the fact that the precious moment had arrived, Grey raised the long-dreamed-of face to his. In the girl's eyes he saw reflected everything that is the best in a human being". 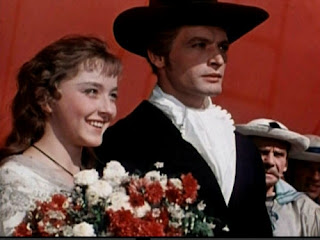 Arthur Grey falls in love with Asole without ever having exchanged a word with her, because through her he has learned that "miracles are made with one's own hands". Isn't it a very beautiful and true moral?

I wish that all of your dreams come true!

Have a great weekend!
Posted by Natalia's Fine Needlework at 4:04 PM

Romance! I am a big fan :). I am not ashamed to admit that I still love the chick flicks and once in a while I want to read all about legendary loves like the Scarlet Sail :).

Nat, I came by your blog last night and read all your old posts and then I found the one with the red and black rug which you were stitching and immediately I and went and take out my sewing kit and started stitching again :). After many many many moons!

I love this story. This is wonderful! And nice to see a screen from Russian film with Russian actors.

I enjoyed the story. Thanks.
Hugs

What a wonderful story. Fantastic way to pick a name for your blog i love it.
Hugs Maria

Thanks for sharing - nice choice for your business name!

Miracles are made with one's own hands... how true, and so right, to take as starting point for your beautiful creations.