Last 2 weeks I have been working on a dollhouse miniature rug that I charted and started stitching last year. Oh boy! I promised myself not to start any other projects till I finish this one, at least we will see, :o))).

I called this rug after my Mom, VERA, and it is translated in English as FAITH.

I am using 49 count silk gauze and Guterman silk.

This is how the rug looked last December 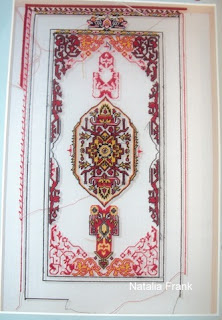 not very big difference, but this is how the rug looks now 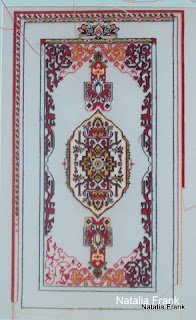 I finished stitching my Ninghsia rug back to February. I don't know why it took me so long between finishing stitching and putting it together, but here it is: the Chinese Ninghsia rug that has been reproduced in 1:12th scale based on the antique original, c 18th century. The rug was stitched on 49 count silk gauize with Guterman silk and measures 4.5" x 8 3/4" with fringe. 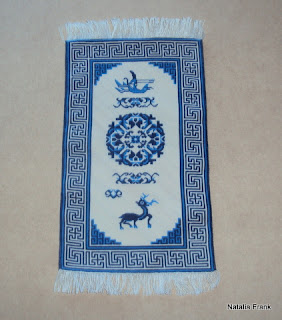 Posted by Natalia's Fine Needlework at 9:30 AM 2 comments:

My last big project was completed in May and it was, as you remember, the dollhouse miniature rug in 1:12th scale "Konya". After blocking it took me for a while to decide what kind of fringe I wanted to finish Konya with. My choice was - tabby weaved fringe. The rug measures 3.5" x 6.5" with fringe. Here are the final pictures. 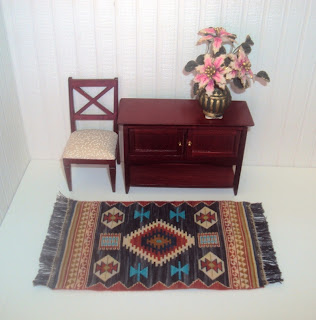 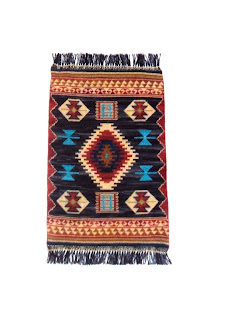 How to make a tabby weaved fringe: 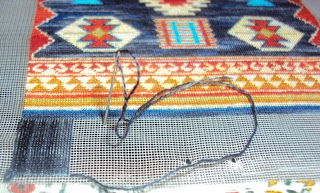 Back side of the rug 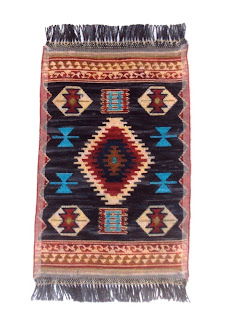 If you are interested to purchase a pattern for the Dollhouse Miniature Area Rug "Konya", you can visit my website at http://www.scarletsailsminiatures.com/shopnow.html?page=shop.browse&category_id=1
Posted by Natalia's Fine Needlework at 11:22 PM 7 comments:

I would like to make a little review on the book "Needlework Styles for Period Furniture" by Hope Hanley. I am sure this book will be a very useful addition to your library if you are interested in reproduction period needlepoint for your dollhouse. 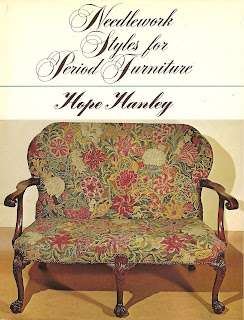 Chapter One. A Bit of Background, Homily, and Other Odds and Ends

The arbitrary dates of 1603 to 1643 cover the beginning of the reign of James I of England to the end of reign of Louis XIII, the time when the kings took a greater interest in building and decorating their royal houses. During this period needlework was used for upholstery in both France and England.

The Regence in France ended in 1723 and Louis XV ruled until 1774. George II ruled England from 1727 to 1760, which consider nicely with the beginning of the neoclassical period in decoration and the age of Chippendale and Adam. If the previous period was characterized as being more relaxed and gay, this period would be said to be exuberant. Many consider the rocaille period to be the most graceful and elegant of all French decorative periods.

The principles of Greco-Roman classical design remained in the Empire style in France, but the new version was much more straightforward and robust than Directoire furniture. Upholstery fabrics were compatible with the new fashion in furniture, the brighter colorsrequiring that the design be less intricate. They were, by no means, simple.

It was in 1803 that the beginnings of a new trend in needlework started. A engraver and landscape painter named A. Philipson published a pattern book in Berlin. The unique thing about the pattern book was that the patterns were printed on checkered paper with a different symbols in the outside outline of each color. The colors were then painted in by hand, square by square. Another Berliner, Frau Wittich, took up the idea and soon led the market in printed patterns. The patterns were called Berlin patterns and were the main feature of a fad called Berlin work that soon swept Europe and America.

The 19th century was the century of revivals, one right after the other and sometimes simultaneously. It was the era of Gothic revival furniture that started in France in the late 1820s and characterized by vertical lines and all the ornamental features of Gothic design, lancets, cusps, and crockets. The rococo revival followed close on the heels of the Gothic and was accepted more widely by the American people.

At the end I want to say that the characteristics of each style are explained and illustrated in 123 photographs (23 in color) and 95 line drawings. You also will find a chapter that describes the stitches.