Today I would like to show you my first new pattern of the year - Dollhouse Miniature Petit Point Rug SERENITY. 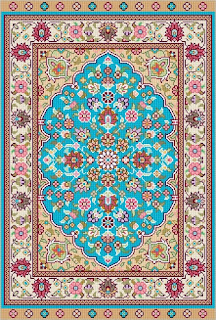 It is currently available for sale as a kit on my website www.dollhouseneedlepoint.com

Posted by Natalia's Fine Needlework at 6:42 AM 6 comments:

It is those last stitches that are always mundane, but a new project to start excites me a lot.

It is a whole ritual that takes a couple of hours for me: to prepare and frame a piece of silk gauze, to print out a pattern, to cut the silk floss. 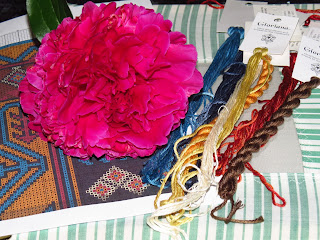 This weekend I've started a new project, a commissioned miniature rug Izmir. This is a reproduction of an antique rug, 18th century.

I use 48 count silk gauze, Gloriana over dyed silk floss. The approximate size of the finished rug is 3" x 4". The updates on the stitching progress will be posted each Sunday. Here is update # 1 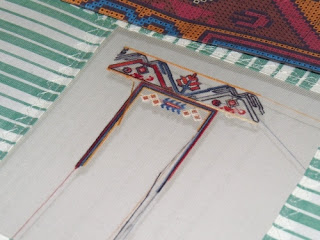 What are you working on?
Natalia

I Wandered Lonely as a Cloud...

I Wandered Lonely as a Cloud 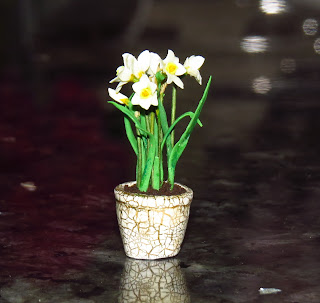 I wandered lonely as a cloud
That floats on high o'er vales and hills,
When all at once I saw a crowd,
A host, of golden daffodils;
Beside the lake, beneath the trees,
Fluttering and dancing in the breeze.

Continuous as the stars that shine
And twinkle on the milky way,
They stretched in never-ending line
Along the margin of a bay:
Ten thousand saw I at a glance,
Tossing their heads in sprightly dance.

The waves beside them danced; but they
Out-did the sparkling waves in glee:
A poet could not but be gay,
In such a jocund company:
I gazed—and gazed—but little thought
What wealth the show to me had brought:

For oft, when on my couch I lie
In vacant or in pensive mood,
They flash upon that inward eye
Which is the bliss of solitude;
And then my heart with pleasure fills,
And dances with the daffodils.

Miniature daffodils is a gift made by a Russian artisan Marina Maslova.

Posted by Natalia's Fine Needlework at 4:07 AM 4 comments:

New Addition To My Collection of Threads

It is hard to call it "collection" since I use all floss I have in my stash. However, today I received a new addition to it - a whole line of Pipers pure silk threads for fine count silk gauze.

I like to have all available colors from a brand, because it allows me to play with the colors the way I want and chose as many for a new project as I am pleased. 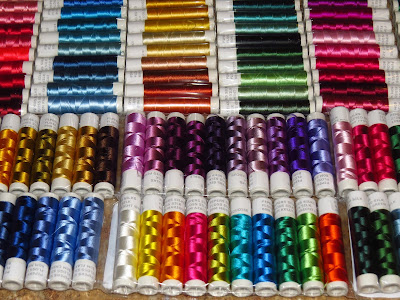 Posted by Natalia's Fine Needlework at 11:10 AM 12 comments: