Once somewhere in Internet I found the comment: "Who on earth in Russia will be interested in the history of needlework?". Needless to say that comment made me think a lot. Believe or not but the embroideries of Russia are undiscovered riches and I want to share with you some information about Russian needlework and its history.
First of all, for those, who didn't know (I am sarcastic here), there are a lot of museums in Russia (http://www.moscow-taxi.com/museums/index.asp). 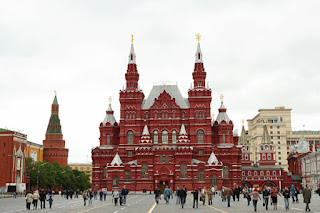 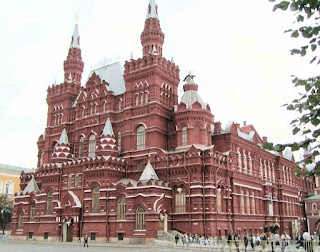 The embroidery collection of the Historical Museum (http://www.shm.ru), that is located in Moscow, is one of the largest and most valuable in Russia. It comprises several thousand embroidered garments, headdresses, ecclesiastical vestments and church pieces, as well as embroideries for domestic decoration, and it includes the work of both urban and peasant embroiderers.
The collection was started in 1872, the date of the Museum's foundation. It incorporates large and fine collections of embroideries of pre-revolutionary Russia, especially those of P. Shchukin, I.Bilibin., N> Shabelskaya, A. Uvarov. Altogether the collection provides an overview of the best work of Russian embroideries at every atge of its development.

Early Russian needlework is represented by ecclesiastical and secular embroideries dating from th 12th to the 17th century. The unique pieces of ecclesiastical embroidery, in particular, embody the best traditions of Russian Art.
Although there is indirect evidence that a great deal of fine needlework was done in Russia in pagan times, it was Byzantine influence that raised the craft of embroidery to an art. Worked with silk with a flat stitch embroidery established itself rapidly.
By the 11th century, monasteries in the large cities in Russia possessed their own schools of weaving and embroidery. The blocks and dyes used during the 11th century were provided by icon painters, a practice that persisted until the 17th century. The designs were often geometric, although some of the earliest surviving examples include patterns of Byzantine and Sassanian origin, while later pieces resemble Italian, Persian, and Turkish textile designs.
The influence of the Middle East is evident in the needlework of the early Christian Church in Russia, where ecclesiastical robes glittered with gold thread, and the rich silks of Byzantium were elaborately worked by nuns who learned their craft as part of their general education in the convents. The gold embroidery is among the most sumptuous and delicate needlework ever made. The surviving ecclesiastical vestments of this perios are worked with small figures or religious scenes, comparable in style with early Russian manuscript illumination, framed by foliage scrolls or set in geometrical or architectural compartments. These designs are worked with colored silks in a fine regular split-stitch, generally on background of couched gold thread.
Several examples of Novgorod embroidery have survived from the 12th century, and reflect the style of the religious art of the period. A piece in the Historical Museum 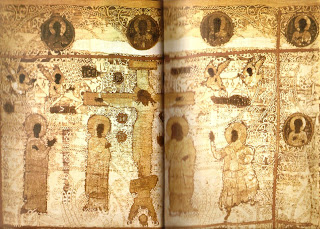 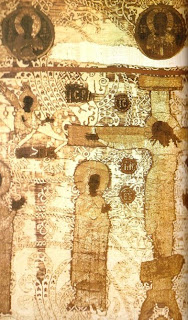 is perhaps the earliest of all. It is worked in flat stitch on a fine 11 th century Byzantine textile woven with designs of Sassianian origin. The rendering of the Crucifixion is linear. The scene is enclosed within a border studded with 11 medallions containing half-figures of Christ, the Evangelists and Apostles. The robes are worked in couched gold and the rest of the scene is in silk.
No major examples of the 13th century embroidery or textiles have been preserved, but the best Novgorod embroideries from the 14th and 15th centuries are very fine. Like their earlier panels, they follow the Byzantine tradition, but their style also keeps step with the contemporary Russian religious painting. Flat stitches continue to be used.To judge by the hangings commissioned by Princess Maria, widow Semyon the Proud, in 1389, the backgrounds remained plain. The figures in the Deisis scene are well-proportioned and elegant. 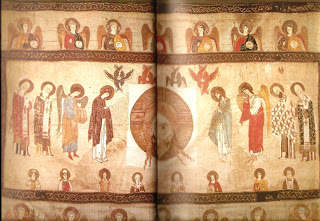 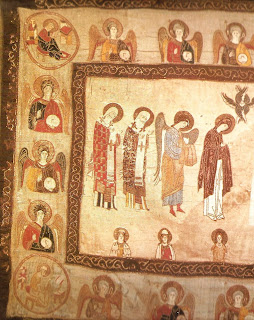 Until the 15th century, nuns were responsible for all the important religious panels embroidered in Russia, and they continued until the 18th century to provide the greater part of what was embroidered. But in the 15th-16th centuries, many fine panels were also made in the sewing-rooms which the ladies of the rilling families established in their palaces. The list of these palace-embroideries is headed by the fine altar cloth showing the Communion of the Apostles worked under the direction of Princess Agrafena between 1410 and 1413 for the Cathedral of the Nativity of the Virgin at Suzdal. Christ appears on it twice, and each time his figure is worked in gold. 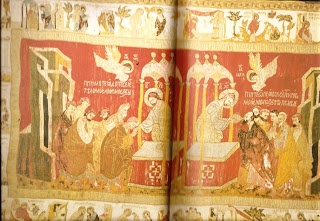 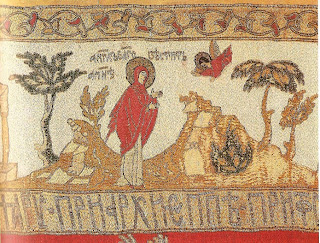 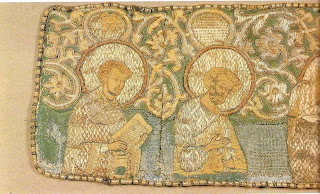 By the 15th century it was not unusual to place a saint's life-size portrait icon beside a coffin. Princess Euphrosyne Staritskaya and her embroiderers worked a portrait-shroud of Prince Feodor of Yaroslavl. Although the style is iconic and the prince's face ascetic, it probably contains an element of true portraiture.

1501
(...to be continued...)
material was taken from the book "Russian Embroidery and Lace" by L. Yefimova
Posted by Natalia's Fine Needlework at 9:14 AM

I came here to read this post especially, having saved it for a day when I am not rushing. I am so glad you posted the information, Natalia. I find the facts fascinating.

Coincidentally, I was just researching Chinese embroidery the past few days. A friend of mine told me about the double sided Chinese embroidery . I think most of us have heard of those with exact mirror image of patterns but I understand the rage now is those with different image front and back. I read about this amazing artisan who embroidered the picture of a lady sitting combing her hair and the back of this embroidery shows her back sitting in the same position!! I am still trying to find an image of this remarkable piece to see for myself :)!

Sans! I know what you mean - Chinese Double-side Embroidery. Back to the 80th my mom owned one piece of this embroidery art that was depicting the cranes. Very beautiful! Very expensive! Natalia

I’ve read about this subject many times but you make some key points not raised anywhere else. Thanks.