SHOW MUST GO ON!

I am an Orthodox and I want to tell you a few words about the history of celebrating the New Year in Russia. It is a little bit confusing, be with me...

In the Christian Russia the beginning of a year was transferred twice.
After the establishment of Christianity in 988, it was carried through the creation of Adam (creation of the world) - from Friday, March 1.

In the times of Ivan III in 1492 (7000 years after the creation of the world) the beginning of the New Year in Russia was postponed to September 1.

Starting from 1700 till the present time, the calendar starts from the birth of Christ, and not from the date of creation. Peter I ordered to "inflict the gates of a decoration of trees and branches of pine, spruce and juniper, and stand to decorate from January to July the number of the same year".

In the early 30-ies of the XX century celebrating the New Year with a Christmas tree was forbidden in Russia (because it was allegedly connected with religion). Prohibition was repealed in 1947.

On the 7th of January we celebrate the Christmas.

I decided to share this information with you because in our home, in our family January is still a month full of holiday spirit. Since my husband is an American, we celebrate the Christmas both ways. The difference is that we don't present the gifts on the Russian Christmas - it is more a religious holiday.

That's why a new challenge that I open for myself in January will be devoted to the New Year and the Christmas. I will stitch 1 project per a day (excluding Saturdays and Sundays): it can be a pillow, or a stocking, or something else but it will be connected to the New Year/the Christmas theme. I am still full of Christmas Spirit. 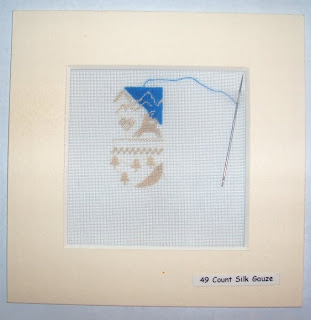 Posted by Natalia's Fine Needlework at 11:07 AM

Thank you for these news, it's interesting to know something about different cutures.
The stocking is already beautiful. Best wishes Rosanna

That's a great way to combine these two different ways of celebrating christmas - and nice to enjoy this special feeling a little bit longer. Many people in Germany leave the tree and decorations till Jan 6th (Day of the 3 Kings), but my family and I finish the christmas season with new year. New calendar, no more christmas tree (LOL). Enjoy the season and of course your stitching, looks great so far.

thanks for this news so interesting!
in December or January, the important thing is to have the Christmas spirit, which is not only to exchange gifts, but feeling generous towards others!
I'm happy for you that the festivities continue in your house, enjoy the rest!
kisses, Caterina

So, have a very Merry Christmas! :)

I have always love reading about history and the Russian history especially about the Tzars have always fascinated me.

I also like how you set yourself targets and projects for your stitching Natalia. For me , I sometimes find it hard to follow my own targets even if it is something as simple as stitch one thread a day :).

Sans, seems like we have now 2 common interests - high heels and history.
I found out that it makes much easier for me to follow my own plan. I just have to do it! Natalia